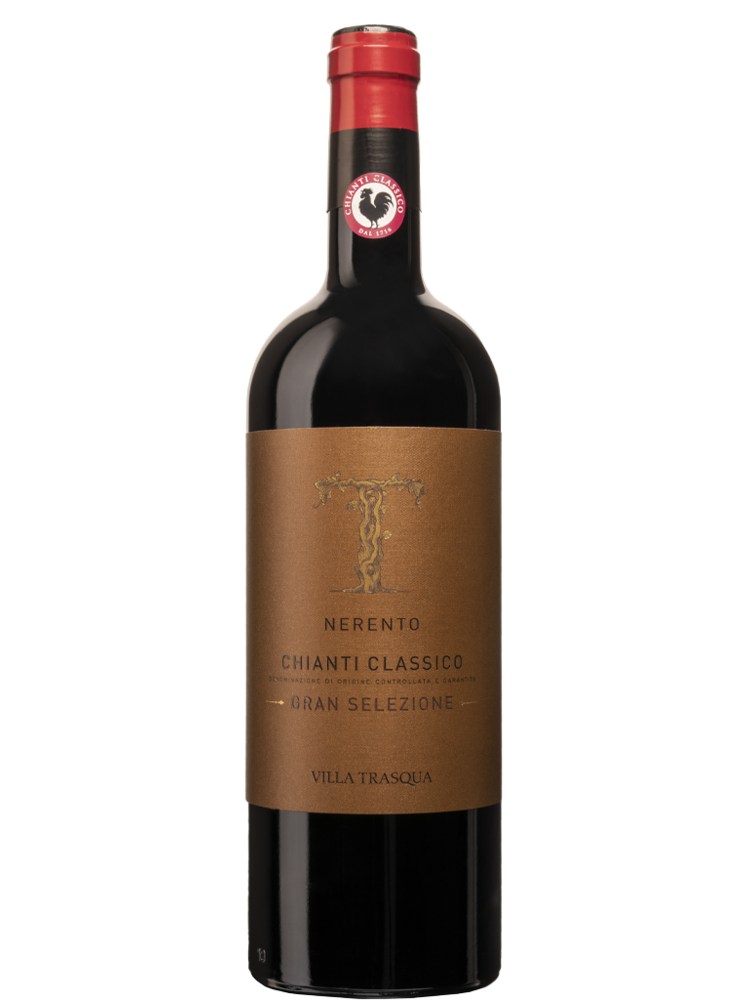 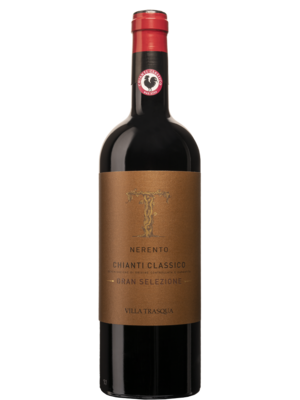 Article code 94JS
$35.00
($35.00 Incl. tax)
8 in stock
'Nerento' Gran Selezione is the top Chianti from Villa Trasqua, a property that has been recorded making wine all the way back to 1001 AD! A masterclass in traditional Chianti wine-making, this food friendly Chianti is off the charts sophistication!

Lively Deep ruby red with light garnet hues. Aromas of great personality, at the start fruity: blackcurrant, blueberry, black mulberry followed by balsamic notes of eucalyptus and laurel. The aromas open up well to spices (liquorice, black pepper and nutmeg) to bring out hints of coffee and cocoa. The impact on the palate is rich, with great personality and enveloping. integrated tannins and with a savoury finish. The fruitiness in the mouth is accompanied by well integrated tannins with a savoury finish. The palate is balanced, with an enduring persistence of blackberry, black cherry and liquorice.

It was on February 4th in the year 1001 and Trasqua makes its first official appearance. It is the land concession that the countess Ava, daughter of the Lombardic Zenobi and widow of the noble Ildebrando, lord of Staggia, entrusts to the nascent Benedictine convent at the church of Abbadia Isola.

Since then, along a "thousand miles" of history, the thread that links the locum dicto Trasqua to the present has never been broken. A rough path, which has seen wars, revolutions, expropriations and assignments, has never lost its natural vocation, that of viticulture.

The 54 hectares of vineyards, within a single plot rest on Pliocene hills which emerged between 6 and 2 million years ago. Soils formed following the transition from a marine to a continental type, characterised by bluish-green ophiolites, raised by the ocean. Stony, hard, marly (Galestro) and crunchy soils where for millennia rainfall has made it even poorer, bringing silt and clay towards the valley. Perfect soil conditions for the vine, which strives strenuously for survival by seeking water and microelements from deep in the ground providing a slow and dosed absorption for the fruits which become perfectly balanced with a timeless elegance.

The uniqueness of Villa Trasqua also lies in the microclimate, influenced by the particular geophysical conformation of the area. A hilly corridor between the Monte Ala massif in the south and the plain of the Staggia stream in the north. A protected yet constantly ventilated micro-environment, which mitigates summer temperatures and generates an important day-night temperature range, helping to secure the perfumes and perfect ripening of the grapes.

It is not coincidence that the ancient cadastral maps refer to the land of Villa Trasqua with the toponym of Spazzavento, a name now used to distinguish a cluster of vineyards located just north-east of the cellar building.

Nerento is a majestic single vineyard made with pure Sangiovese grapes, coming from the oldest vineyard of the estate that has been known for the quality of its grapes since the mid-nineteenth century. Complex, wonderful and exuberant, it contains the secret of the terroir of Villa Trasqua, the iconic wine, the very essence of the Sangiovese produced in Castellina in Chianti.

GRAPE VARIETIES: 100% Sangiovese
VINIFICATION: In trunconic wooden barrels of 5,000 litres at controlled temperature of 26/28 °C with maceration (skin contact) for at least 22/25 days.

AGEING: 30 months of ageing in French wood tonneaux of 500 litres followed by at least 12 months of bottle fining.